HOW POOR AFRICANS REFUSE TO BE CHEATED AND FOOLED BY THEIR CORRUPT LEADERS: THE CASES OF SOUTH AFRICA’S JACOB ZUMA, KENYAN’S UHURU KENYATTA AND ETHIOPIA’S HAILEMARIAM 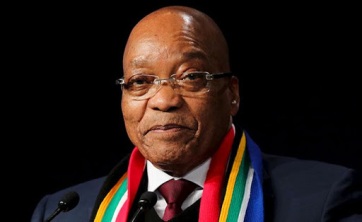 While December, 2017 could be cited as the month of the people of Zimbabwe for compelling, defeating and ejecting authoritarian Robert Mugabe who had vowed to die in power into the first self-presidential resignation case in the SADC sub-region, the month of January 2018 is dedicated to Kenya’s opposition leader, Raila Odinga and his National Super Alliance (NASA) for standing up against the treason threats of corrupt and oppressive President Uhuru Kenyatta to conduct their own ceremonial presidential inauguration ceremony with thousands of their supporters in the capital city. In the same vein, the month of February, 2018 is dedicated to the loving brothers and sisters across the Limpopo River, in South Africa who under the leadership of the ANC’s president Cyril Ramaphosa resolved to recall and retire corrupt Jacob Zuma as the President of their great republic due to rampart corruption scandals around him and his family. In addition, we praise God for the month of February, 2018 once more for the gallant citizens of Ethiopia who forced their oppressive, Prime Minister, Hailemariam Desalegn to resign in order to facilitate rule of law, justice, human rights, democracy and good governance to reign in the continent’s diplomatic capital state.

With a unanimous vote to recall Jacob Zuma back to be an ordinary party member on 13th February, 2018, as he had become morally unfit to rule and allow him to exist the republican presidency, the ANC leaders and the South African people must be applauded for redeeming their country in particular and the continent in general from malicious corrupt political leadership. The calls for Zuma’s resignation were multiple and audible across the country, particularly after South African Public Protector and recipient of Transparence International Integrity Award in 2014, Thuli Madonsela published a report on state capture in South Africa in November 2016. The report highlighted how public officials in South Africa took bribes to award contracts to the private sector, and how Zuma’s ties to the controversial Gupta family empire have compromised the running of the state.

Although President Jacob Zuma was constitutionally bound to leave power in 2019, the South Africans and ANC leadership just refused to be cheated and fooled to have a fellow citizen with embezzlement, plundering and looting allegations to continue being their president. While Zuma faces corruption charges such as fraud, racketeering, looting, theft by public servant, state capture and other corruption charges, the South African political leaders, CSOs, religious organizations, students, outh, media, scholars and labour movements have proven to the world that African political leaders are not ‘impeachable’ by the voters even before the tenure of office comes to an end when they malicious loot, steal and embezzle public resources or abuse the office with Jacob Zuma and Robert Mugabe as good cases.  Whatever will happen to retired Zuma, the fact remains that the gallant citizens and leaders of his own country have clearly denounced his kleptocracy and rejected him as their republican president. This is exceptional political legacy which other African citizens in Zambia, DR Congo, Equatorial Guinea, Uganda, Kenya, Sudan, South Sudan or Togo must embrace and emulate given that they are all battling with well-known corrupt leaders. For example, Zambia’s President Lungu recently announced that it is fine to steal while in government as a politician or civil servant in his famous slogan “ubomba mwibala alila mwibala”.

Ironically and coincidentally, Kenya has been ruled only by leaders from two ethnic groups of Kikuyu and Kalenjin since its independence in 1963. In the latest case for 2017, we are talking about Uhuru Kenyatta who is from the Kikuyu group visas Raila Odinga from the Luo group.) Sadly, Kenyan politicians use a “winner-takes-all” political approach, in which the president of the day and his governing party empirically sideline other ethnic groups in preference to theirs when distributing jobs, contracts, education opportunities and public service delivery. This has been the epicenter of political divisions and electoral battles in Kenyan politics and has deepened a sense of hostility and injury among political parties and ethnic groups

In a historical show of political power and ethnic hostility, a disputed presidential election in 2007 which was also contested by Raila Odinga triggered bloody and deadly ethnic violence for weeks in many parts of Kenya with more than 1,500 people left dead. Following this deadly political episode, a coalition government of national unity was set up. In 2013, Raila Odinga contested, lost, petitioned and lost the presidency against Uhuru. In September, 2017 Raila Odinga and his political alliance took petitioned the results of the August presidential election which declared Uhuru Kenyatta as the winner. In a historical judgement, the Kenyan Supreme Court overturned the election results against the sitting Head of States and Government, Uhuru Kenyatta because of huge electoral irregularities in his favour and called for a rerun set for October, 2017. In a bold move, Raila Odinga boycotted the October rerun citing that the same conditions which existed in the August fraudulent elections were not addressed by authorities to ensure a free, fair and credible vote. And following the October rerun of Uhuru Kenyatta alone which was upheld by the Supreme Court, Raila Odinga and his political alliance vowed to reject Kenyatta as the country’s leader by declaring him an illegitimate president.

But despite in December 2017, being publicly threatened by the Attorney General of Kenya, Githu Muigui that “swearing-in of an alternative president constitutes an act of treason in Kenya — a crime punishable by death according to the Penal Code, on 30th January, 2018, Kenya’s long-standing opposition leader, Raila Odinga inaugurated himself as the country’s people president before more than 2,000 supporters of his National Super Alliance (NASA) at Nairobi’s Uhuru Park in Nairobi. Although several news outlets were intimidated and shut down for broadcasting  a successful mock political parade live and many supporters blocked by police from attending the ceremonial and historical event, Raila Odinga and his gallant supporters must be saluted and commended for refusing to be fooled and betrayed by corrupt and embattled Uhuru Kenyatta through a stolen presidential vote. As symbolic as it was, the oppressed people of Kenya sent a strong vote of no confidence in Uhuru’s stolen presidency by turning out in huge numbers for their brave veteran opposition leader who commands popular support and has only been disadvantaged to rule the country by rampart vote rigging.

3. THE CASE OF OPPRESSIVE DESALEGN VISAS THE GALLANT PEOPLE OF ETHIOPIA

Hailemariam Desalegn became the Prime Minister of Ethiopia in 2012 following the death of the former Marxist rebel, Meles Zenawi who saved as Prime Minister of the country for decades. Under Zenawi, Hailemariam was a low-profile politician and technocrat who at some point served as deputy prime minister and foreign minister respectively. Under Hailemariam just like Zenawi, hundreds of people have died in political violence sparked by either developmental issues, ethnicity, political differences or human rights violations. Mass and gallant protests against the policies and leadership of Hailemariam had been spreading across the country with 2015, 2016 and 2017 being marked with demonstrations against political restrictions and human rights abuses.

Despite the government trying to ease tensions last month by issuing a string of pardons and releasing of political prisoners  in order to improve the national consensus and widen the democratic platform, February, 2018 continued to witness more and more anti Hailemariam mass protects such as young men blocking roads and businesses remaining closed in and around Addis Ababa. But all these protests were happening against a background where, in 2015, following months of anti-government demonstrations, Hailemariam and parliament endorsed and declared a 10-month nationwide state of emergency. But on 15th February, 2018, the gallant people of Ethiopia pressured the oppressive leader to step down and surrendered political power back to the people through a voluntary resignation. “Unrest and a political crisis have led to the loss of lives and displacement of many; I see my resignation as vital in the bid to carry out reforms that would lead to sustainable peace and democracy.” Hailemariam said in a televised address to the nation. Although his stepping down is too unprecedented in this east African country, the fact remains that it is good news for oppressed citizens and creates a conducive environment and hope for the promotion of democratic values and institutions in Ethiopia.

In conclusion, it is crucial to stress that, whilst Africa is hitting higher records of holding periodical presidential and general elections now than ever before, it is also becoming clearer that the continental leadership zeal and regional political atmosphere to uphold, promote and sustain the core values of democracy  and good governance in many countries such as Zambia, Zimbabwe, Equatorial Guinea, Ethiopia, Togo, South Africa, Madagascar, Tunisia, Uganda, Kenya, DR Congo, Burundi, Chad, Cameroon, Algeria, South Sudan or Sudan seem to be gradually and systematically evaporating and dying off. American federalist, Alexander Hamilton once said that “When a government betrays the people by amassing too much power and becoming tyrannical, the people have no choice but to exercise the original rights of self-defense – to fight the government”. This is what the people of Zimbabwe, South Africa, Ethiopia and to some extent Kenya did. Now the people of Zambia, Uganda, DR Congo, Burundi, Togo, Sudan, Egypt or Cameroon have free political lessons to think through and emulate.