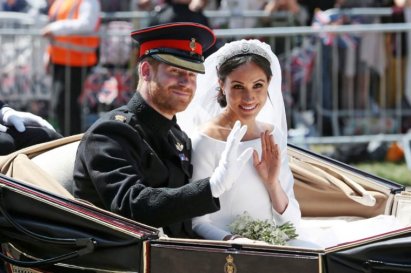 The royal wedding and marriage of Prince Harry and Meghan Markle on 19th May 2018 reminded the world another true meaning of ‘love conquers all’ as well as ‘love is blind’ given that, what brought the two different people and families together seem smaller than what would have separated them for life. From another lane, this royal love and wedding taught us that, when a man truly falls in love and is ready to marry, he doesn’t date a woman for ages like studying medicine or make uncertain marital commitments like waiting for the second coming of Jesus Christ; Prince Harry and Meghan Markle only dated for less than 2years and got married. Honestly speaking, I want to join the rest of the world to congulate the royal couple for officially joining hands to start a long family life journey as soulmates. But what political lessons can we learn about Africa and educated Africans from Prince Harry and Meghan’s royal wedding? Many lessons indeed.

By wildly celebrating Prince Harry and Meghan’s wedding who is a great grandchild of their former royal political oppressors and colonialists when most of them have been made to denounce their own clanship chiefs or ethnic kings, many Africans who unfortunately are educated only confirmed how they are blind followers of ‘Muzungus’ and can support anything as long as it comes from that end. Throughout May, 2018 using the mirror of Prince Harry’s wedding, many educated Africans have shown the world that they are comfortable to disrespect and betray their own traditional institutions (chiefdom and kingdoms) while supporting and strengthening Western ones like the English monarch.  While it is fine for millions of Africans to follow and trend the English Royal Wedding, it is certainly a bad colonial mentality for citizens of the ‘dark continent’ to exaggerate their respect, recognition and allegiance to the English Royal Family especially when most of them do not show any direct moral connection, open alignment and social allegiance to their own indigenous leaders like chiefs, kings and elected politicians in their respective countries.  But this is who and what most Africans are.

Empirically, most Africans are both subjects who belong to a specific traditional lineage or chief as well as citizens of a given modern sovereign state. This means that many Africans are like the English people with dual identity of belonging to the state and the monarchy system. But the excitement and attachment most of the elite Africans demonstrated towards Prince Harry’s wedding can be said to be a brutal betrayal to their own lineage chiefs or ethnic kings. Most of these Africans who expressed religious devotion and naked support to the English Royal Wedding have never done that to their ethnic royal leaders during either weddings or other important events for their chiefs and kings. The level of dedication to the English Royal wedding or marriage was so overwhelming from many educated Africans in general and Zambians in particular while most Africans do not even know the wedding anniversary of their respective chiefs, kings or republican presidents. This is a terrible colonial mentality for people who claim to be politically emancipated and educated to rule and develop themselves.

While many Zambian and African families took time to watch, research and maybe even comment on radio, TV, Facebook, Tweeter, WhatsApp, Instagram, etc about this English royal wedding, it is very unfortunate to note that the same people and families have very little knowledge and respect for their own traditional and political leaders back at home. If what happened in England was to happen in Ghana, Zimbabwe, Kenya, Uganda, Zambia or Nigeria, the same educated Africans would have condemned and criticized their own leaders with elite pomp, jealousy pride or unpatriotic malice.  This is where we fail our countries and continent as Africans because we merely or mainly show unquestionable solidarity for everything ‘Muzungus’ do as well as full allegiance to Western values, practices and institutions than our own local values, institutions and personalities. Through the wedding of Prince Harry and Meghan, we now know that many Africans are theoretically schooled but still institutionally and mentally enslaved to love and support Western norms, values and practices than their indigenous heritage.

Through the Western media platforms and the education system, Prince Harry’s wedding validated the fact that, the ‘Muzungus’ are fully still in-charge of African mental processing, perception creation, language, public self-esteem, communal identity and key social themes and narrative for their interpersonal engagements. The ‘Muzungus’ are well organized, structured and powerful to manipulate, dominate and control the belief systems and social behavior of most Africans through the global hegemony and monopoly of institutionalized Western media such as BBC, CNN, France 24hours, Russia Today, DWTV, Sky News, Facebook, Twitter, Instagram, WhatsApp, Google, Yahoo, etc as well as their doctored and tailor made international education system.   If you critically analyze the current standing were many educated Africans (mother, father and their respective children) religiously know and understand all the pertinent love and marriage details of Prince Harry and his wife more than the love and marital life of own local traditional leaders (chiefs and kings) or political leaders (republicans presidents, governors or MPs), then you know that many Africans are still mentally chained as blind followers and political cadres of ‘Muzungus’. Let us accept that we are good idiotic folks for the West.

In conclusion, it is overt to stress that the wedding of Prince Harry taught Africans and all the global citizens that the West support the West and do everything possible within their powers and means to stand with and defend the West even when they disagree for the good image and public interest of the West. For example, the wedding of the Prince of the English monarch was highly advertised and crazily covered by and on BBC, CNN, France 24hours, Russia Today, DWTV, Sky News, Facebook, Twitter, Instagram, WhatsApp, Google, Yahoo, etc as this was so crucial for the West to define, defend and sustain global Western identity, monopolization and hegemony. And at the epicenter of this well-structured Eurocentrism, norms and perception creation, political manipulation and control as well as cultural domination and institutional take over, Prince Harry’s wedding taught many of us that most Africans (the very educated African folks)  are terrible blind followers and political cadres of ‘Muzungus’ who are unwilling and not ready to respect and popularize their local chiefs, kings and elected republican presidents but are zealous to support, praise and idolize the Queen or Prince of the English monarchy and everything Western; many educated Africans are weak thinkers and good idiotic fellows for the ‘Muzungus’.