Rape and defilement in the sun: the growing horrors of women and girls in South Sudan 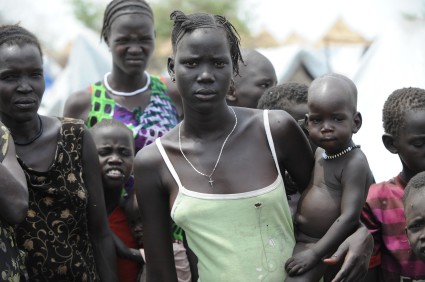 In the eyes of the United Nations, African Union, East African Community and the famous permanent members of the UN Security Council in the United States, UK, France, Russia and China, the women and girls of South Sudan have been betrayed, forgotten and left alone to daily face some of the worst brutal horrors of civil unrest like child defilement, rape, attempted rape, incest, GBV related murder cases, Assault Occasioning Actual Bodily Harm (O.A.B.H), human trafficking and torture. Practically speaking, to most women and girls in South Sudan, the UN Sustainable Development Goals (SDGs) such as number 1, 2 and 3 respectively i.e. to “eradicate extreme poverty and hunger”, “achieve universal primary education” and “promote gender equality and empower women” do not apply or exist at all.

According Doctors Without Borders (MSF), an international aid agency on 1st December, 2018, unknown attackers raped, beat and robbed more than 100 women and girls in northern South Sudan over a 10-day period in November alone.  “Women and young girls have been coming to the MSF clinic in Bentiu en masse over the past week after surviving horrific episodes of sexual violence. Some are girls under 10 years old and others are women older than 65. Even pregnant women have not been spared from these brutal sexual attacks” Ruth Okello, an MSF midwife in South Sudan, was quoted in an MSF official statement last Friday.

“We treated 104 sexual and gender-based violence survivors in the first 10 months of this year, and we have assisted 125 survivors in the past week alone.”…”In more than three years of working in South Sudan, I have never seen such a dramatic increase in survivors of sexual violence arriving at our programs looking for medical care,” said Okello.

The United Nations officials confirm the ongoing brutality and human rights violations women and girls face in waring South Sudan. The head of the UN peacekeeping mission in South Sudan, David Shearer on 28th November, 2018 called for an end to violence against women in the country as part of a global campaign. “Here in South Sudan, women and girls have suffered immensely because of the ongoing conflict. I’ve spoken to many of them who have been subject to sexual violence including rape. This must stop”, David Shearer concluded.

But the South Sudan government is not supporting nor defending the victims of rape and defilement but choose to stand with the rapists. The State Minister of Information, Lam Tungwar in Northern Liech State, where the attacks were reported, told Reuters news agency that the accounts were not accurate. “A rape of such a magnitude is not true. We are a state (that) respects human rights and women’s rights top our list,” Lam Tungwar told Reuters adding that incidents of violence would be dealt with in the local courts.

MSF adds that in addition to being raped, the women and girls in Rubkona county were whipped and beaten with sticks and rifle butts. The attackers also stole their clothing, shoes and anything of value and destroyed ration cards needed for food aid. The assaults came as more people are on the move in Rubkona county to try to reach food distributions in the area. Women are walking in groups for safety but are still being confronted by increasingly larger groups of aggressive attackers, the aid agency said.

South Sudan, the world’s youngest country born in 2011, has been engulfed in ethnic war, civil conflict and political instability since 2013 following power struggles between President Salva Kir himself of the Dinka people and his former vice president, Riek Machar of the Nuer people. South Sudan has 64 tribes with the largest being the Dinkas, who constitute about 35% of the population and predominate in government. While the Nuers are the second largest ethnic group.

According to Oxfam International in their November, 2018 report, over 4 million people – 1 in 3 – have been forced to flee their homes due to this brutal war while nearly 2.5 million have fled to neighbouring countries with  now 1 million South Sudanese refugees in Uganda, making up about half of the country’s total refugee population. While this is the biggest refugee crisis in Africa and most of these refugees are women and children, over 7.1 million people – half the country’s population – are facing extreme and deadly hunger.

In September, 2018, South Sudan’s president, Salva Kiir, signed a peace agreement with Riek Machar led rebel groups with the poltitical and diplomatic support of Saudi Arabia, Sudan, Uganda and Ethiopia that creates a government of national unite between the two waring politicians. However, it is not yet clear if the agreement will hold and return political stability and peace.

Chris Zumani Zimba is a prolific Political Scientist, Analyst, Author, Blogger, PhD Scholar, Researcher and Consultant. Besides being the CEO and Managing Consultant at Chrizzima Democracy University (CDU) in Zambia, he analyses African politics weekly on Voice of the Cape Town, South Africa every Wednesday at 16:45hours CAT. So far, he has authored more than 10 political and academic books as well as published over 100 well researched articles.