Human Rights in the Gown of a Ghost Town: Zambia 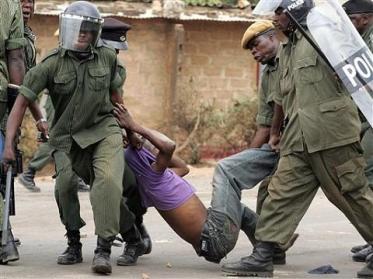 2nd October, 2018, a lady in her 4th year of study at the University of Zambia suffocated to death. According to information published by Lusakatimes on 5th October, 2018 titled “Female UNZA Student Suffocates to Death After Police Fire Tear Gas in Her Room” Vespers Shimuzhila died in her room as a result of Police throwing teargas canisters in her room.

This caused grief as well as bitterness around the country, especially amongst youths, it also attracted articles, demonstration songs, made headlines, peaceful protests and concerns were raised about if the police are meant to protect lives or take lives, when the protectors of human rights become the rational abusers, things are likely to go that way or worse.

Days ahead saw movements and profile themes that read “justice4vespers” and months later were still water and full of nothingness, anyone who had seen the propensity by the Zambian youths to seek justice for the death of their fellow can admit it lit social media on fire and that was the start and end. As it stands now, no one speaks, no one supports. The memories are inheld only by friends and relatives who suffered the loss and nothing than meresay motivated the social media propaganda. This is a matter that raises serious questions of the future of Zambia and the energy its young people unleash on social media and how little they do in practice, the future of any country depends on the ability of its young people to be rational perpetuators of social justice and freedom, this is to say, national development and security has a lot of leaning on social justice. Without social justice, there is no guarantee of national security or development, if Vespers’ life was cut short by what can only be defined as carelessness and human rights disrespect by the Zambia Police then there is no guarantee for my rights or yours, the same event can have a reoccurrence sooner or later, the untimely death of the 4th year student has a lot to say about the future of Zambia and the way the forces inforce the law.

People are the masterpiece of every democratic state and the primary elites should answer to their people and the voters, if not, then the state has failed democracy, the way politics are executed should not interfere with the lives of civilians and if they do, the government has the higher responsibility to see to it that it puts measures that will counter any possible threat to people’s lives.

If you want to create change, if you want something done, and no one is doing it, then do it. If justice will not be met, the demise of Vespers should motivate the Zambian young people to move a step further in ascertaining that the woes of human rights violations will not end with giving the responsibility to the armed forces but if civilians protect civilians, if it matters to me what happens to you and each eye looks out for another, then we can secure a good future. Everywhere else in the world, power of absolute delicacy is given to the countries young people because the future matters and the future is theirs, when you see a country where young people are killed instead, extreme force used on them, then the future is being killed, then the future is brutal.

In this piece, one can learn two things, social media’s overtaking of rationality and deciding the future while you can. When the expressions are made, full of power, full of energy and full of resolutions and they end up on the internet and that’s all, the youth are seen as incapable, desperate and unease souls. When the future is being violated and the present situations are not working for the future, then the future is unplanned. An unplanned future is due to a disorganized youth populace of mere retribution and bitter emotions.

In the near future, when the baton of leadership is passed to the youth, it is what we do now that will enable us to create a better country or continue the trend of disrespect for human rights and rational violations, a king that cannot stand up and rebuke his servants wrong deeds is not a good king at all, strongman actions and politics will leave us with broken wills and a foundation that will be poorly firm.

As it stands, voices are low and actions have diverted from what seemed like a fight for justice to seasonal jokes, the city that produced willful Zambians with the zeal to see justice done is now a ghost town as we continue down the path of uncertainty and emotional dullness.

Mwiza Bwali is a blogger with Afrodemocracyjournal, a genius BA Political Science Student with University of Lusaka (UNILUS) who authored “In Awe We Stare” as a teenager. He remains a rare inspiration to and among Zambian youth and students