The Law always favors the Sitting President: The Painful Horrors of Opposition Abubakar in Nigeria and HH in Zambia 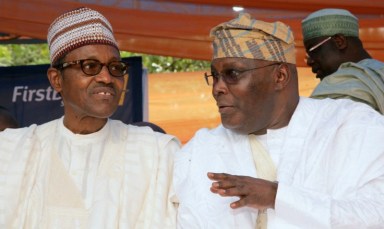 One famous quote by Niccolo Machiavelli stands out: “For among other evils caused by being disarmed, it renders you contemptible; which is one of those disgraceful things which a prince/ruler must guard against”. In every country and state either under a totalitarian, authoritarian or democratic government, what the renowned feudal Italian political philosopher advanced is chiefly what every political leader in power tries to observe, guard and defend. In other words, every sitting president tries to make sure they hold political power intact in such a manner that their political rivals are constantly weakened and disadvantaged at all cost. This is so notoriously crucial especially in modern democracies where for one to acquire state power, it comes at a great cost and pain. This means as Machiavelli said, you cannot afford to lose the acquired state power so easily or carelessly to your rivals unless you are a finished political fool. In Africa, this Machiavellian political mantra is well understood and applied across the region; opposition Abubakar in Nigeria and HH in Zambia are feeling it squally and living in this political horror in the ongoing February 2019 political campaigns respectively.

Election campaigns are reaching its climax in Nigeria with one week to go before the ballot.The commercial hub of Lagos in the southwest is expected to grind to a halt as President Muhammadu Buhari visit for a rally in front of tens of thousands of supporters this weekend while his main opposition rival, Atiku Abubakar, is also holding a “mega-rally” in the capital, Abuja. Both events are among the final stops on the campaign trail around Nigeria’s 36 states and the Federal Capital Territory before voting begins next Saturday. Buhari, 76, wants a second, four-year term while Abubakar, 72, is hoping to finally secure the presidency after four previous attempts. However, Atiku Abubakar’s “mega-rally” in the capital Abuja has been cancelled by the local authorities for unclear reasons. The Peoples Democratic Party (PDP) says the Federal Capital Development Authority (FCDA) stopped it from using the Old Parade Ground in Abuja for its presidential “mega/main rally”  scheduled for 9th February, 2019. A statement, yesterday, by the Director of Media and Publicity, Mr. Kola Ologbondiyan, said: “It might interest Nigerians to know that the PDP duly paid and secured permission to host our mega rally at the Old Parade Ground, in Garki Area of Abuja, only for the officials of the facility to inform the party this morning that they have been “ordered” to shut down the venue and frustrate our mega rally for no just cause.”

In Zambia, campaigning opposition leader of the UPND, Hakainde Hichilema (HH) and his entourage of hundreds in party members and officials were stopped by state from entering Sesheke district on the legal basis that the Zambian sitting President, Edgar Lungu was also in the district at a political rally where he was drumming support for the PF parliamentary candidate Dean Masule. When the opposition leader and his party supporters tried to impose themselves and show political power in brutal deviance to the known existing law and clear orders in what seemed as a schemed attempt to overpower, undermine and humiliate state police and the presidency, heavy teargas canisters were used to disperse them and HH with his gallant political supporters found themselves in toxic smoke. “Our lives are in danger as Police and PF cadres are discharging live ammunition at us and our people. We appeal to the Nation to remain calm but steadfast for any eventualities to come,” Mr Hichilema posted on his Facebook page. HH knew what he was doing and what to expect; he wrote and acted this political play.

Simple observation: it is a fact that the sitting president anywhere is government and the government is all about the sitting president. And by simple conceptual meaning, a government is defined as “the group of people with the authority to govern a country or state”; it all about a counted group of adult citizens with a constitutional mandate to run a country or state. Especially in presidential democracies, those in the opposition are completely outside this institution we call government. And on many occasions, they directly feel the negative political reality and impact of their situation as they find themselves trapped by multiparty legislations against them but in favor of those in power. As there is no balance between a host and a visitor in terms of privileges at home everywhere, the opposition everywhere find themselves living with the painful horrors of being disadvantaged to stand as equal players with the sitting president by existing public policies and national laws.

But this is where being in the opposition in functional democracies become more politically meaningful and fulfilling as it gives the opposing rivals unstoppable energy to vigorously contest for state power in an electoral contest and win to form government in order to start defining and determining national matters to their favor. What is happening in Abuja’s Nigeria to Abubakar and in Sesheke’s Zambia to HH where they existing laws and public policies red card them from conducting political rallies or campaigns anyhow on some days, times or venues in order to pave way for the sitting president and his party simply explains and justifies this deliberate imbalance of global political and legal reality. While it sounds unfortunate and biased legal and political standing, the fact remains that it is existing political fact and reality everywhere as many laws around political governance and conduct worldwide are designed to favor its makers or those in power.

Chris Zumani Zimba is a prolific Political Scientist, Analyst, Author, Blogger, PhD Scholar, Researcher and Consultant. Besides being the CEO and Managing Consultant at Chrizzima Democracy University (CDU) in Zambia, he analyses African politics weekly on Voice of the Cape Radio, South Africa every Wednesday at 16:20hours CAT. So far, he has authored more than 10 political and academic books as well as published over 100 well researched articles. Sometimes, he lectures Political Science-Part Time with University of Zambia (UNZA) and University of Lusaka (UNILUS) outside his usual commitments.