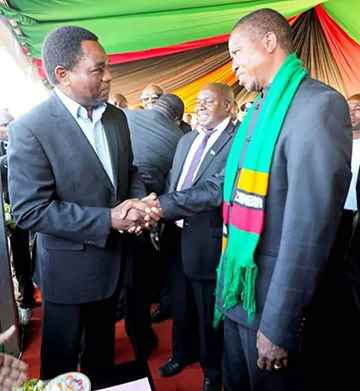 The growing levels of political desperation and policy inconsistencies with the aim of gaining overnight political popularity especially among the Zambian opposition leaders is both worrisome and scaring. Generally, we know that what most political parties and leaders promise to the mass voters before and during election campaigns must be based on their respective party policies and written manifestoes. However, the new practice totally different, there is a growing political culture of ‘constantly manufacturing street campaign messages and political promises’ based on what is happening, ‘selling’ and trending on social media or in public domain. For example, there is a notorious political drama as well as a shameful policy contradiction concerning the President of the United Party for National Development (UPND), Hakainde Hichilema (HH) from the February 2019 Sesheke parliamentary bye election episodes regarding police officers before and after elections that is worth given critical political scrutiny and vertical policy analysis.

At the peak of campaigns, the Sesheke by elections were painted with physical political violence between the ruling Patriotic Front (PF) and UPND cadres as well as staged witchcraft at some point where bees and lightening targeted, wounded and killed some PF cadres. At the heat of everything, UPND and HH emerged as chief complainants against the Sesheke police officers and service especially following the ‘famous’ purported police political assassination of the UPND leader. On 12th February, 2019, Zambian Observer covered UPND and reported that:

“The Zambia Police High Command has continued misrepresenting the facts of the happening is Sesheke where voting of a new lawmaker is peacefully in progress. We wish to refute claims by the Zambia Police spokesperson Esther Mwaata Katongo that it is an absolute lie which should be dispelled with the contempt it deserved. We, the UPND, and other stakeholders have demanded professionalism from the police who have always conducted themselves as PF cadres”, the UPND leadership issued a strong condemnation, open criticism and head on assault on the police officers in Sesheke in particular and the police service in general.

But when the state later retired four Sesheke police officers in national interest blamed for being physically involved in brutally beating, wounding and maiming some cadres to near death as well as being openly politically aligned and based on the above prior complaints submitted by HH himself and UPND allies, the UPND leader once more emerged with unwarranted impulsive utterances and proclaimed a 360 degrees contradictory statement with the aim of gaining overnight voter sympathy and political popularity. Below is part of what he said on his official social media page via Facebook on 18th February, 2019:

“We have noted the continued harassment and firing of civil servants performing their duties lawfully by the PF with dismay. The recent being the firing of police officers who maintained law and order in the Sesheke parliamentary by-election… However, we would like to assure all the civil servants and in this case men and women in uniform not to lose hope because once in government, we will give back your jobs”, Mr. Hakainde Hichilema posted and confirmed.

From the two contradictory positions taken by HH and UPND camp on Sesheke police officers in particular, it is clear that UPDN is now abandoning its written party manifesto and have started cooking campaign promises and political messages right on the street based on what they are feeling, hearing, thinking and seeing.  Consequently, critical political observers like me and most informed citizens could draw the following possible interpretations and conclusions:

In conclusion, it is clear that HH’s impulsive utterances and contradictory statements on Sesheke police officers before and after the bye elections brutally lack the political integrity of crystal clear tap water or the thickness of goat milk in terms of policy consistency and honest. As such, such contradictory positions on the same topic within a week can only be said to constitute the yellow urine of street political promises: never consistent, never clear, never reliable, never true and but always changing based on the feelings, temperature, taste and mood of the speaker and the events of the day. Nelson Mandela once said “A good head and a good heart are always a formidable combination”: on the topic hand, this desirable formidable combination seem not to exist at all for HH and UPND.

Chris Zumani Zimba is a prolific Political Scientist, Analyst, Author, Blogger, PhD Scholar, Researcher and Consultant. Besides being the CEO and Managing Consultant at Chrizzima Democracy University (CDU) in Zambia, he analyses African politics weekly on Voice of the Cape Radio, South Africa every Wednesday at 16:20hours CAT. So far, he has authored more than 10 political and academic books as well as published over 100 well researched articles. Sometimes, he lectures Political Science-Part Time with University of Zambia (UNZA) and University of Lusaka (UNILUS) outside his usual commitments.