“Hope” for Peace in warzone Libya: Killing Gaddafi was killing Libya and everything 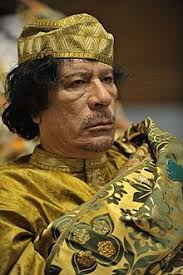 The UN has welcomed a truce agreed by Libya’s main warring parties during the three-day Muslim festival Eid al-Adha. It follows a car bomb attack on Saturday in Benghazi which killed three UN staff. The truce involves the UN-backed Government of National Accord and the rogue general, Khalifa Haftar.  His forces have been attacking the capital, Tripoli, since April. More than 1,000 people have died, according to the World Health Organization.

Gen Haftar agreed to the truce “so that Libyan citizens can celebrate this Eid in peace”, his spokesman Ahmad al-Mesmari explained. The truce started on Saturday at 15:00 local time (13:00 GMT) and would last until the same time on Monday afternoon, the spokesman added.

Eid al-Adha is the Muslim festival which commemorates when God appeared to Ibrahim in a dream and told him to sacrifice his son but before the sacrifice goes ahead, God provides a lamb to be sacrificed instead. The festival happens after the Hajj – the annual pilgrimage to the holy city of Mecca in Saudi Arabia.

Libya has been beset by chaos since Nato-backed forces overthrew long-serving ruler Col Muammar Gaddafi in October 2011.The oil-rich country, a key departure point for some of the thousands of migrants travelling to Europe, once had one of the highest standards of living in Africa, with free healthcare and free education.But the stability that led to its prosperity has been shattered and the capital, Tripoli, is now the scene of serious fighting between rival forces as negotiations to build a post-Gaddafi Libya stall.

Chris Zumani Zimba is a prolific Zambian Political Scientist, Policy Analyst, Author, Blogger, PhD Scholar, Researcher, Consultant, Public Health and Tobacco Control Advocate. So far, he has authored more than 10 political and academic books as well as published over 100 well researched rticles. Chriszumanizimba.cz@gmail.com or chriszumanizimba@yahoo.com; +260 973 153 815 for calls or WhatsApp. This article is made possible by Centre for Multiple Democracies, Good Governance and Peace (MDGGP) under Chrizzima Democracy University (CDU). But the views are attributed to the author and not CDU.