Russia-Africa Summit as Putin rejoins China, India and the West to scramble for African resources 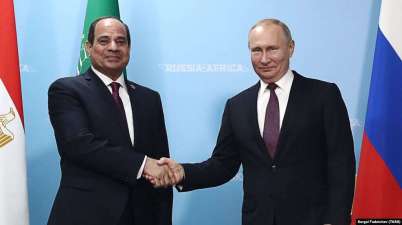 Today, 23rd October, 2019, the Russian president, Vladimir Putin has welcomed thousands of African leaders to discuss politics and business “worth billions of dollars” in Sochi, Sirius Park of Science and Art in his country. Russian President Vladimir Putin met with his Egyptian counterpart Abdel-Fattah el-Sissi who is the current chairperson of the African Union (AU) before the two leaders opened the first ever Russia-Africa Summit this Wednesday.

According to Kremlin advisor Yuri Ushakov, all 54 African states sent a representative to the meeting, including 43 heads of state or government.

The two-day event will see more than 3,000 delegates from across Russia and Africa to discuss an array of topics from nuclear energy to mineral extraction. “Joint projects are underway in extractive industries, agriculture, healthcare and education,” Putin said in his opening remarks.

“We currently export to Africa $25 billion ($22.5 billion) worth of food — which is more than we export in arms, at $15 billion. In the next four to five years I think we should be able to double this trade, at least,” Putin said.

Russia has dominated arms sales in Africa but this time, Putin has promised further African cooperation without “political or other” interference. This comes as a reassurance to African states who have previously expressed concerns about dependence on China.

Russia is hoping to sign a potential military cooperation agreement with Ivory Coast. The West African country is expected to send a delegation of 70 people to Sochi, including President Alassane Ouattara. In addition to “military and security cooperation” with Africa, Putin also pledged Russian commitment to combat the Ebola virus with aid, and the training of “African cadres” by Russian universities.

Coming back to challenge and compete with the West, China and India

Russia had played a more crucial role in the continent during the Soviet era, supporting independence movements and training government leaders in former Soviet client states such as Angola and Ethiopia. Moscow’s relations with Africa deteriorated after the fall of the Soviet Union in 1991, with China taking over as the continent’s key foreign business partner.

In 2000, Beijing established the Forum on China-Africa Cooperation, pledging tens of billions of dollars into Africa. This summit is a comeback of Russia into Africa in order to challenge and compete with China, India and the West for both trade, economic, political and military partnerships and influence in the region.

Chris Zumani Zimba is a prolific Zambian Political Scientist, Policy Analyst, Author, Blogger, PhD Scholar, Researcher, Consultant, Public Health and Tobacco Control Advocate. So far, he has authored more than 10 political and academic books as well as published over 100 well researched articles. Chriszumanizimba.cz@gmail.com or chriszumanizimba@yahoo.com; +260 973 153 815 for calls or WhatsApp. This article is made possible by Centre for Multiple Democracies, Good Governance and Peace (MDGGP) under Chrizzima Democracy University (CDU). But the views are attributed to the author and not CDU.